Their lawyer, Mark B. Frost, says that he believes “Director Shea and the chief did not take corrective action once my clients reported the sexual harassment.”

“Retaliation occurred to both of my clients, that’s what caused Kelly Chesler to be deomoted and Joe Ascolese to retire.”

One of his first moves was to name Robert “Bubba” Cowan as Chief of Police for the JCPD – who was eventually removed from his position on June 25, 2014 following a string of negative press stemming from civil lawsuits.

According to the lawsuit, in August of 2013, Chesler and Ascolese developed a plan to expand the Special Operations Division for the JCPD to compromise the Motorcycle Squad, Emergency Services Unit (ESU), the K-9 Unit, and the Rapid Deployment Team – which Cowan approved.

Ascolese also proposed having Chesler named as Executive Officer for the new Special Operations Division, and in September of 2013 she was, with her immediate supervisor in that position being him.

Shortly after she began her new position, Chesler claims Officer John Peters – named as a defendant in the lawsuit – began a pattern of harassing her based on her gender.

Peters – who was a subordinate of Chesler – is accused of stalking and threatening her, inquiring with other officers about her sexual history, and creating a hostile work environment according to the complaint. Specific accusations from the lawsuit include:

– In approximately March of 2014, the suit claims Peters told Officer #1 and Officer #2 that he had “dirt” on Chesler, that she was “going down,” and “I’ll get her” due to Chesler’s gender.

– The suit also claims that in March of 2014 Peters asked Officer #1 whether he and another officer had sex with Chesler. Ascolese stated Officer #1 told him about what had allegedly occurred, and that he ordered the officer submit a report setting out the comments that Peters had made.

– Upon information or belief, Peters supposedly made an anonymous phone call to Deputy Chief Joseph Delaney on or about March 26, 2014 and falsely accused Chesler of taking “whisper days” due to her gender. A “whisper day,” as defined in the suit, refers to when an employee does not show up to an assigned shift but is paid nonetheless.

– Chesler claims that around July 5, 2014, Peters attempted to intimidate her by allegedly waiting for her outside her office, after midnight, while she was inside alone.

– On or about July 25, 2014, Chesler states she informed Peters that she had heard him allegedly making derogatory comments about her to other officers, that he was constantly glaring at her, and that he had been refusing to speak with her.

– On September 25, 2014, Chesler claims she was told by another officer that Peters allegedly was ranting about her in front of other officers and appeared unstable, and that she should wear a bullet-proof vest at all times to protect herself.

According to the lawsuit, Chesler informed Peters multiple times that his alleged conduct constituted harassment against her. She also claims, as well as Ascolese, to have informed JCPD leadership about many of her complaints, but that the JCPD failed to halt or even investigate the alleged harassment.

The lawsuit also states, on or about June 30, 2014, Ascolese claims to have filed a report with Delaney where he stated that Peters’ conduct towards Chesler was hostile and harassing.

In addition, on or about July 29, 2014, Ascolese claims to have filed another report with Delaney in which he forwarded Chesler’s July 25, 2014 report.

Following the filing of the reports, the suit states on July 30, 2014, Chesler and Ascolese met with Delaney, two supervisors from internal affairs, then-Acting Chief Zacche, Deputy Chief Cowan (who had returned to his old position following Fulop removing him as chief), and Deputy Chief Joseph Connors.

Connors is also named as a defendant in the lawsuit.

Chesler claims that during the meeting she asked why her complaints had not been investigated, and that she was told she needed to make an EEOC (Equal Employment Opportunity Commission) complaint before the JCPD could look into it– which the suit claims is contrary to the city’s anti-discrimination policy.

The lawsuit alleges high-ranking officers present at the meeting were aware of her complaints, but that they refused to take action to remedy the alleged harassment.

In addition, the lawsuit claims she was retaliated against not only for her complaints of sexual harassment, but because she had refused to support or donate money to the Hudson County Democratic Organization (HCDO).

Chesler claims that on September 14, 2014, Timothy Crowley allegedly called her private cell phone and asked for a donation to the HCDO.

According to information obtained by Real Jersey City, Crowley was elected 1st Vice President of the Jersey City Police Officers Benevolent Association in 2012. Crowley’s brother, Terrence Crowley, is named as a defendant in the lawsuit.

Additionally, in September and October of 2014, Chesler claims Zacche told her that she had the “bubba stink” – supposedly referring to her association with Cowan and his lack of support for Fulop.

Details in the lawsuit state that on October 2, 2014, the internal affairs unit began to investigate an incident where Chesler approved a police escort for the Don Bosco High School football team to Newark International Airport.

Chesler claims, upon information and belief, that the investigation was in retaliation for refusal to support the HCDO and her complaints of sexual harassment. She also states that the escort provided was common practice, and had been previously approved routinely.

As well, upon information and belief, Chesler claims that Shea and Connors allegedly engaged in a concerted effort to discredit her and remove her from her position – including Shea falsely accusing her of creating overtime shifts for officers in ESU.

According to the lawsuit, on October 31, 2014, Shea allegedly indicated to Zacche that the Motorcycle Squad was “running all over” Chesler, and that Connors indicated to Ascolese “the inmates are running the asylum.”

At a March 24, 2015 Jersey City NAACP meeting, Shea referred to the Motorcycle Squad – which was recently disbanded – as a “club.”

In what she claims was retaliation, Chesler was demoted on or about November 12, 2014 from Executive Officer of Special Operations to Commander of ESU – which is a substantial reduction in power and responsibility, according to the lawsuit.

The suit also states that JCPD supervisors exacerbated the sexual harassment against Chesler following her demotion.

Of note, in October of 2014 defendant Terrence Crowley was promoted to the rank of Lieutenant.

According to Chesler, on November 14, 2014 she informed defendant Crowley that Zacche was allowing her to continue to share Ascolese’s office. The lawsuit states that after Chesler left, Crowley supposedly pointed to his genitals and stated to Officer #4 and Officer #5 that “she thinks because she has one of these (pointing to his genitals) that she’s going to keep me out of this office? [Pointing to Ascolese’s office] This is going to get hostile.”

During the time period, according to the lawsuit, a report surfaced wherein Crowley allegedly used the words “n***e*” and “cu**” (derogatory terms for black people and women, respectively) on a 2010 police report, and that upon information and belief Crowley had been previously disciplined for violating the JCPD sexual harassment policy.

An OPRA request from the city for discipline reports involving Crowley returned this response:

“The discipline reports that you seek are materials that result from an internal affairs investigation. Thus, they are confidential and exempt from disclosure under OPRA.”

In addition, the lawsuit states that in a January 22, 2015 meeting between Zacche, Ascolese, and Chesler, the chief purportedly said that Shea told him Chesler had engaged in sexual activities with “half the motorcycle squad.”

Chesler and Ascolese were removed from their positions in special operations and transferred to patrol on that same day, according to the suit.

The lawsuit states that prior to being transferred, Chesler was the only female in a command position in the entire JCPD – one of only two female lieutenants.

Also mentioned in the suit, upon information and belief, there have only been two other female officers to reach the rank of lieutenant or higher, and that both experienced sexual harassment and were forced to take legal action.

Furthermore, Chesler claims on February 4, 2015, another officer told her Peters allegedly stated in late 2014 that he was going to do “everything I can to destroy” her and Ascolese in retaliation for complaining of sexual harassment against him.

On that same day Chesler stated she was informed that Peters purportedly filed a complaint against her of criminal wrongdoing with the Hudson County Prosecutor’s Office in retaliation for her sexual harassment complaints.

According to details in the lawsuit, on February 11, 2015, Chesler complained to internal affairs regarding the sexual harassment against her, as well as an anonymous letter she received days earlier detailing sexism and racism within the JCPD.

As well, she claims someone told her Shea allegedly instructed internal affairs to “find dirt” on her for the sexual harassment complaints and not donating to the HCDO.

Chesler claims the pattern of harassment, discrimination, and/or retaliation against her is ongoing as of the filling of the complaint. She also claims to have suffered from loss of salary and/or wages, benefits of employment, emotional distress, and other economic and non-economic damages.

Chesler and Ascolese are seeking over $100,000 in damages related to the lawsuit.

Chesler and Ascolese, as well as others from the Motorcycle Squad, were featured in a Kane In Your Corner (KIYC)-News 12 report in August of 2014 that alleged they were bilking the city for thousands of dollars in overtime.

Additionally, the report claims Chesler and Ascolese were traveling back and forth from Morris and Bergen counties, respectively, with city vehicles they were assigned.

The August 2014 KIYC report also identifies Chesler as a lieutenant in the Jersey City Police Department’s Motorcycle Squad – not Executive Officer of the Special Operations Division, as the lawsuit states her position was at the time.

A March 4, 2015 KIYC report alleged Jersey City police officers were falsifying timesheets so they could get paid for work that was not performed connected to the Pulaski Skyway road construction project, including two unidentified members of the motorcycle squad.

The report also stated KIYC law enforcement sources said it was under investigation, but that the Hudson County Prosecutor’s Office had no comment on the Pulaski Skyway investigation.

Jersey City Spokesperson Jennifer Morrill did not respond to an email seeking comment on the lawsuit, and whether any of the Jersey City officers identified in the August 2014 KIYC report have been disciplined or charged with any wrongdoing. 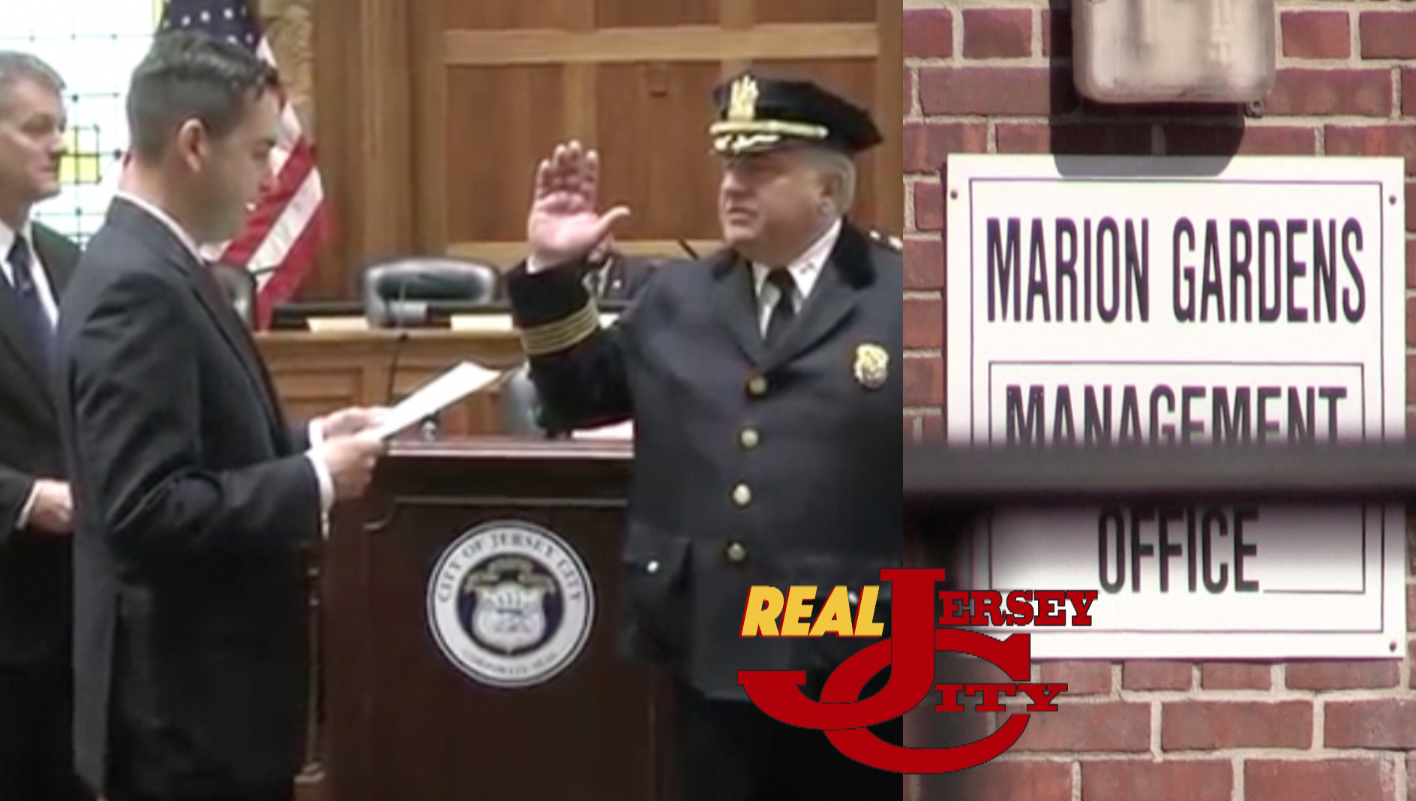