An investigation by the U.S. EEOC determined that Sabrina Harrold – a Jersey City Recreation Dept. employee with an active whistleblower lawsuit against the Fulop Administration – “has been and is still subject to a severe and pervasive hostile work environment.”

Three weeks before the Fulop Administration issued a press release touting a major restructuring of the Recreation Dept., the U.S. Equal Employment Opportunity Commission (EEOC) made a final determination establishing that the City of Jersey City had “not taken the appropriate measurements to prevent, stop, and remedy the discrimination which continues to this day” of Sabrina Harrold.

Harrold is a city employee with a whistleblower lawsuit alleging retaliation for reporting financial malfeasance within the department.

According to the lawsuit, Harrold was transferred to the Rec Dept. around March 2014 and assumed the title of Assistant Department Director (also serving as acting director for a short period after Ryan Strother was fired). Sadly, around September 30, 2015, Harrold was diagnosed with cancer and went on leave in accordance with the Family Medical Leave Act (FMLA).

Adding insult to injury, as she was battling cancer, the suspicious behavior at the heart of the complaint apparently started.

While on leave, Kevin Williamson was appointed director by Mayor Fulop around November 25, 2015, and shortly thereafter Harrold was informed that Angela Rivera, a co-worker, and Williamson “were trying to gain access to her office and that the locks were being changed,” according to details from the suit.

The complaint goes on to state that when Harrold returned to work around February 2016, Williamson informed her that she was no longer the assistant director and was demoted and placed into a non-essential function with no assigned specific duties. Additionally, between December 2016 to May 2017, Williamson is accused of threatening several employees – Flash Gordon, Cliff Perkins, Daniel Ali, Andrew Kemp, Tommy Best, and Gary Nye – to stay out Harrold’s office and not speak with her.

Furthermore, Harrold claims that on May 3, 2017, Williamson had cameras installed that “monitored specifically in front of her office and nowhere else in the office.” When Harrold expressed concerns about the cameras to Rivera, she was summoned the following day to a meeting with Williamson and Bunbury and was informed that she was being disciplined for her comments, according to the lawsuit.

The suit states that Harrold refused to sign a disciplinary form and the cameras were eventually removed from in front of her office a few days later.

Around January 5, 2018, prior to being replaced as director by Arthur Williams, Williamson once again instructed all staff to stay out of Harrold’s office, according to the complaint. Yet, the suit goes on to state that around February 15, 2018, Williamson apologized to the plaintiff for how he treated her during his tenure and advised that she file an EEOC complaint against Williams for comments allegedly made regarding a potential transfer.

Despite Williamson’s warning, Williams ultimately asked Harrold to assist with a payroll audit of the Rec Dept. on March 8, 2018.

During the audit, Harrold claims she discovered some of the employees picking up checks were suspicious (including family members of Rivera). Further investigation revealed other discrepancies and the plaintiff’s findings were eventually submitted to Williams – who then notified Fulop, Albiez, and the Law Department, according to the lawsuit.

The complaint goes on to state that around March 15, 2018, Williams informed Harrold that he told the mayor it appeared Rivera “is the culprit” regarding misappropriation of funds, but that the mayor was more concerned about Rivera’s ties to the Hispanic community, and asked “how is this going to affect the Hispanic community?”

Moreover, the lawsuit claims that around March 21, 2018, Williams met with Carbone and Bunbury regarding Harrold’s findings. Both Carbone and Bunbury were apparently more interested in questioning the plaintiff’s credentials & qualifications to conduct an audit, and alleged that the findings were based on “a witch hunt against Angela Rivera,” according to details from the complaint.

Weeks later, news of the payroll scandal was published by Bruce Alston on The Hudson County Chronicles – which apparently enraged Fulop. The mayor allegedly sent a “disturbing text message” to Williams threatening his job and threatening to conduct an investigation to determine the leak when the news first broke on Facebook.

Additionally, on the same day the payroll article was published by The Hudson County Chronicles website (April 11, 2018), Harrold was sent an email by Bunbury stating that the plaintiff would be transferred to HHS effective April 19, 2018, according to the lawsuit.

That decision was allegedly made in retaliation for reporting the misappropriation of funds in the Rec Dept., designed to sabotage Harrold’s career with the city, and violated Civil Service Laws. However, the transfer never actually occurred based on an appeal to the state Civil Service Commission.

The Fulop Administration filed a response on June 5, 2019, requesting that the case, which they say is based on Harrold’s “bare assertions,” be dismissed.

When the city filed its opposition brief, it might’ve had a point about “bare assertions,” but nearly three weeks later, on June 24, 2019, an EEOC report made a final determination establishing that Harrold “has been and is still subject to a severe and pervasive hostile work environment” – providing credibility to the whistleblower lawsuit against the Fulop Administration.

Specifically, the EEOC’s final determination found that there was reasonable cause to believe that Harrold was discriminated against by the city on the basis of her “sex, age, disability,” and that she was subjected to derogatory comments by Williams such as – “you should retire, I need younger people working on Recreation,” “Ms. Harrold is as useless as tits on a bull,” and “I need to get that bitch out of the office.”

According to sources, Harrold’s complaint was one of many filed by Rec Dept. employees against Williams. It’s believed most of the complaints were filed towards the end of 2018. The EEOC report regarding Harrold notes that there’s a “myriad of complaints against the director.”

Additionally, a report by The Jersey Journal from May 25, 2018, states that the Office of the New Jersey Attorney General (NJOAG) was investigating the misappropriation of funds within the Rec Dept., but no update regarding that investigation has since been reported.

“The restructuring is to ensure the City is offering the best services and support that it can to our young citizens, treating them as future professionals and capitalizing on the contributions they make to the community now and will make in the future,” said Lucinda McLaughlin, Director of Jersey City Youth Counsel, when the restructuring was first announced.

Today, McLaughlin was appointed as the acting Rec Dept. director, in a move Fulop described as proof that his administration is “Demonstrating the Value Placed On Having More Female Decision-makers at the Table.“

Jersey City spokesperson Kimberly Wallace-Scalcione did not respond to an email seeking comment on Harrold’s lawsuit or the EEOC report, and wouldn’t answer whether or not the EEOC report had anything to do with the recent restructuring of the Recreation Department.

Of note, Harrold is being represented by attorney Christopher C. Roberts of East Orange, NJ, while the city is represented by the Newark-based law firm Lite DePalma Greenberg, LLC. 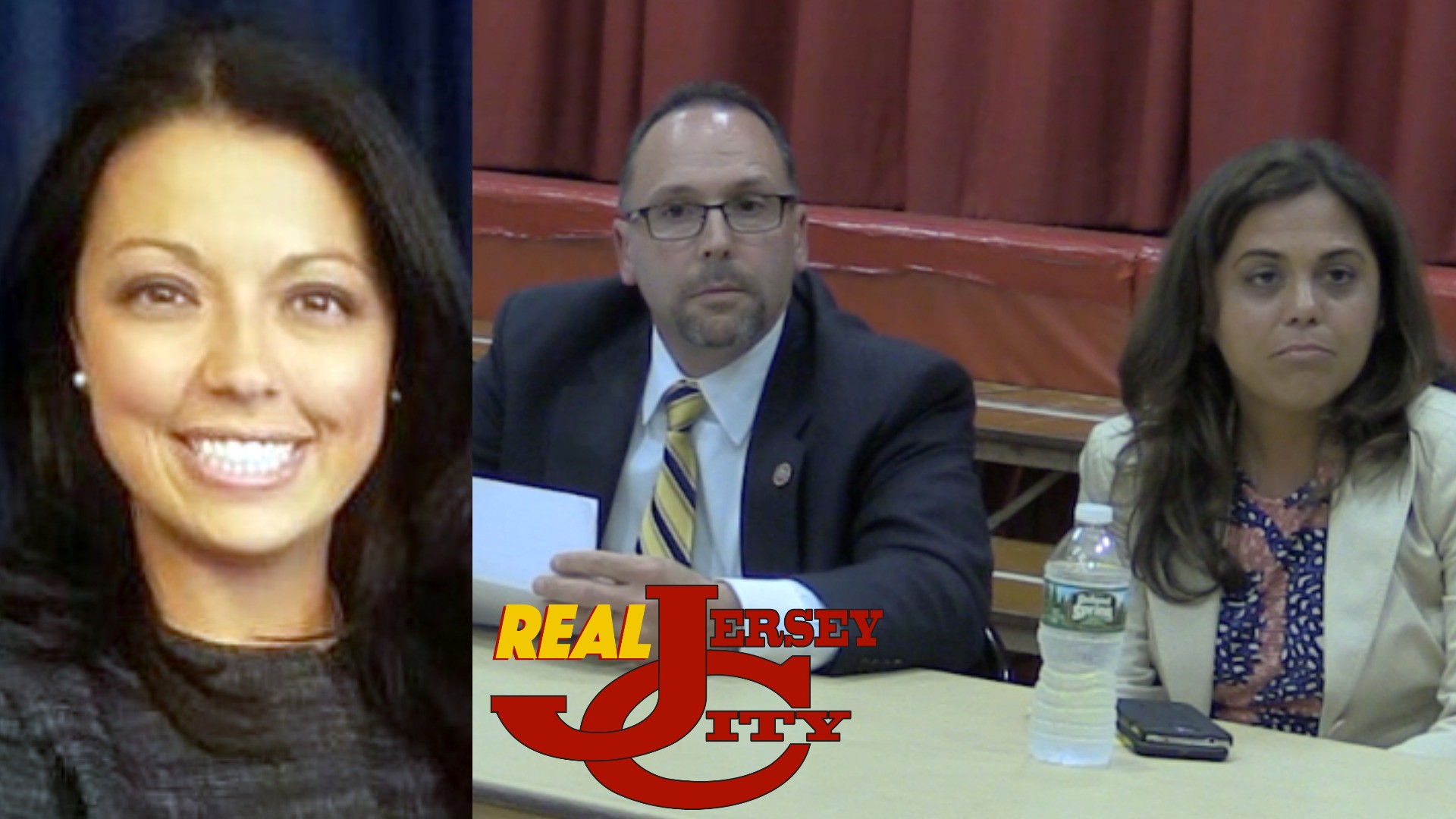