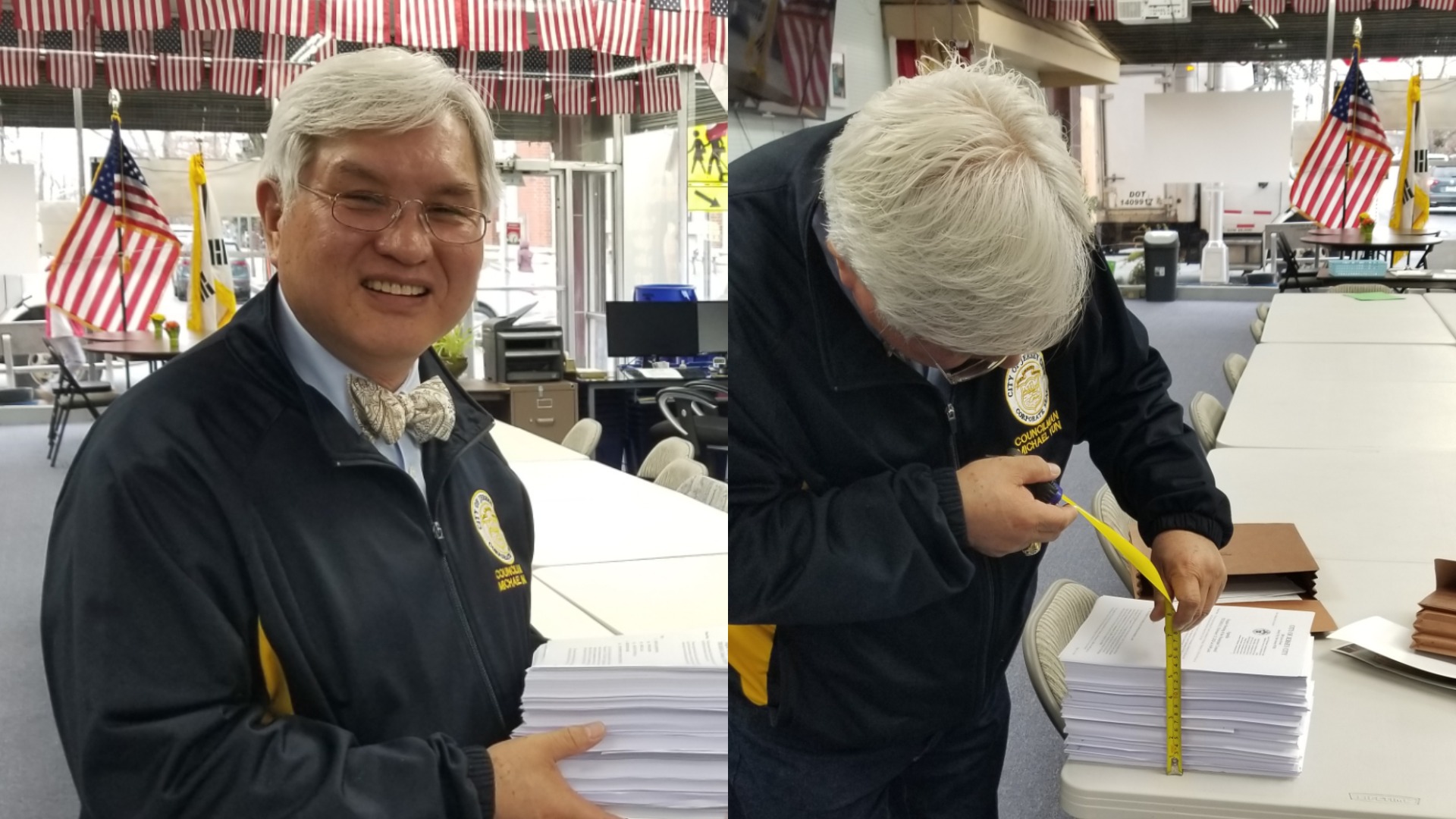 It’s been said that politicians and diapers should be changed for the same reason, but if there were ever an irreplaceable politician, especially in a place like Jersey City, it was Councilman Michael Yun. That’s why it hurt to read that he lost his battle to COVID-19 on April 6, 2020, at the age of 65.

Michael Yun was a family man. He was a South Korean immigrant and successful entrepreneur that lived his American Dream. He was a charitable person and community activist that united diverse people.

However, for better or worse, the Michael Yun I knew was a politician. Perhaps he was an excellent politician because 1) his family values helped him build personal relationships; 2) his work ethic made him a successful businessman; and 3) he was a local philanthropist in the Jersey City Heights.

The rest of this piece is an unvarnished tribute to Councilman Michael Yun – the story I think he would’ve wanted me to write, including some thoughts on the politics surrounding the Ward D seat on the Jersey City Council.

I had met Yun before the night of May 31, 2013, when I co-moderated the 2013 Ward C & D runoff debate alongside Yvonne Balcer, but I wasn’t particularly inspired by his candidacy (him skipping the first debate didn’t help). His opponent at the time was then-Assemblyman Sean Connors (Team Fulop 2013) and things got ugly during the closing statements, including an unforgettable moment for myself.

Specifically, Connors sparked an uproar from the crowd when he accused Yun of 1) being a liar; 2) not living in Jersey City; and 3) being a Republican (at that point Yun’s supporters became rowdy). Before Connors could finish his diatribe, Cynthia Hadjiyannis, Yun’s campaign manager in 2013, began yelling at me to stop the closing statement – probably because Yun was visibly distraught from the verbal attack.

Unfortunately, I was there to ask questions, not referee closing statements. Anyhow, the real story was that Fulop’s top political operative, Tom Bertoli, and his 2013 Ward D Leader, Shawn “Sully” Thomas-Sullivan, had already made a backroom deal with Yun that deprived Connors of a full GOTV operation.

On June 11, 2013, the voters of Ward D elected Yun; however, it’s safe to say politics are subject to change and time heals most wounds. By 2017, Yun and Connors were running together as independents, and it’s not crazy to believe Yun told Ward C Councilman Rich Boggiano that he would’ve wanted Connors to fill his Ward D seat.

Truth be told, Connors was right about one thing during his infamous closing statement.

Michael Yun was a Republican. He certainly wasn’t a Trump Republican, though, he did endorse Gov. Chris Christie’s re-election in 2013. If anything, Yun was a compassionate conservative.

Yun was fiscally conservative, a champion of property rights, and built his own political machine without a patronage mill. He was brilliant & diligent, the pictures featured at the top of the article are of him receiving his pack of ordinances/resolutions before a city council meeting – which he would meticulously review over a weekend and through a caucus meeting (sometimes annoying his more passive colleagues).

Also, when looking at the pictures featured in this story, it’s hard not to notice the display of American flags throughout Yun’s Central Avenue office. Simply put, the councilman I knew was a patriot – especially for his support of America’s Forgotten War Heroes. WATCH BELOW:

Nevertheless, Yun hired progressive council aides, or at least the three I’ve known best. He made charitable donations to liberal causes and local organizations. Most importantly, his office was a quasi-safe space for activists across the political spectrum, not only from the Heights, but throughout Jersey City (especially for Fulop’s foes).

Yes, Michael Yun was a great politician, but he wasn’t perfect. Sometimes he abstained when he knew the right thing to do was say No. Sometimes he was reactionary when he could’ve been visionary. Yet, compared to the majority of politicians I’ve come across, that’s nitpicking.

In the end, maybe it’s true that politicians and diapers should be changed for the same reason, but if there were ever an irreplaceable politician, especially in a place like Jersey City, it was Councilman Michael Yun.

The Ward D seat on the Jersey City Council

For those interested, Ward E Councilman James Solomon and Councilman-at-Large Rolando Lavarro conducted public interviews with candidates that were vying for an appointment to the council – PLAYLIST BELOW:

Now, to keep it real, did anyone actually think Fulop’s allies would do anything other than replace Yun with another Fulop loyalist? Additionally, sham process or not, Connors – despite receiving support from Boggiano and Yun’s family – was wise to pull his name from consideration for reasons beyond Hudson County politics.

That’s because the 2020 election will be like none other. There will be an extremely high turnout due to the presidential election. No one knows what campaigning in a post-coronavirus world will be like. Not to mention, the Jersey City Council will almost certainly have to vote on some unpopular items between now and November 2020 (forget about 2021).

As of today, Yousef Saleh – who campaigned for Fulop’s Ward D candidate against Yun in 2017 – was officially appointed to the council. Don’t know him personally, seems like a nice guy, but his selection seems like great politics for Fulop.

It’s great politics because 1) Fulop’s obviously built relationships with Jersey City’s Muslim leaders, representation matters, and Saleh has a nice resume; 2) any Fulop candidate is going to have an uphill battle to win Ward D if Yun’s supporters coalesce behind a specific candidate; and 3) even if Saleh were to lose the special election, Fulop would still have 5 votes on the council, and his team could find a more electable candidate for 2021.

Finally, regardless of what happens in Jersey City’s near future, I’ll probably be scratching my head like Michael Yun when I read some of the stuff the city council will be voting on.